The project has now ended. Please see the final report for more information and overall conclusions.

Many thanks to all of those that helped to make the project a success. Other projects are now in progress thanks to OVAL pilot, see their websites and blogs:

Online Veterinary Anatomy Museum (OVAM)
OVAM aims to provide access to veterinary anatomical resources in the form of a virtual museum, which will be hosted within the WikiVet platform. It will provide access to comprehensive and  pedagogically structured set of veterinary anatomical resources produced by a variety of partners including universities and publishers.

PublishOER
The PublishOER project will develop new ways of expanding the open educational resources (OER) 'pool' with high quality published content by investigating new business models for embedding published works in OER. It is a partnership of organisations including Elsevier, JISC Collections, Rightscom (with links to all publishers) and educational providers, particularly the Royal Veterinary College (RVC). 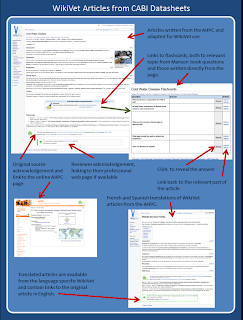 We now have the Adobe Connect recording of the launch event. The whole day, including the OVAM launch, is covered so the recording are quite long but you may find it useful to view if you are interested but were not able to come. Have a look at the agenda to see which part of the event you are interested in.

Just an update on the most recently published and advertised pages. We are coming to the end of the project! Just a few more pages to be tweeted and Q&A books advertised on Facebook and we are done.

Streptococcus and Enterococcus Infections in Poultry

Cryptobiosis
Posted by WikiVet at Tuesday, November 29, 2011 No comments:

We are running an event on the 9th December to mark the dissemination of the Opening Access to Veterinary Literature (OVAL) and the launch of Online Veterinary Anatomy Museum (OVAM) projects. It will be held at the Royal Veterinary College.
You are probably very familiar with the OVAL project now, after all, you are reading the blog! As it is coming to a close, we are running the dissemination event. We were fortunate to receive funding for the OVAM project recently and as it is going to build on the lessons learnt during the OVAL project, we thought it is a good idea to combine its launch with OVAL dissemination.
The OVAM project is also funded by JISC as part of the Content Programma 2011-2013. OVAM will provide access to a comprehensive and pedagogically structured set of veterinary anatomical resources from UK veterinary schools and other institutions. These will be aggregated and ordered in an environment which will make them easily discoverable by different cohorts of learners. Key to the success of this project will be the development of effective methodologies to embed and integrate these materials within a traditional curriculum to maximise exposure, uptake and sustainability.
For more information about the event please see the agenda. Everyone is welcome but we would particularly like to encourage those interested in contributing to the anatomy museum (OVAM). The event is free but places are limited so please email Bara to book your place.
Posted by WikiVet at Thursday, November 24, 2011 No comments:

WikiVet is on iTunes

You probably already know that as part of the OVAL project, we have recorded several podcasts. We have a selection of podcasts in English, French and Spanish. They are available free via iTunes.


iTunes is a media player computer program, used for playing, downloading, and organizing digital music and video files on desktop computers.. The front page of this displays high-profile podcasts from commercial broadcasters and independent podcasters and allows searching by category or popularity. Once subscribed, the podcast can be set to download manually, or automatically — and as with other audio, content can be listened to directly or synced to a portable hardware device like an MP3 player.


WikiVet has now established a presence on iTunes and has published over 50 short podcasts on disease related topics. These can be listened to online through a laptop or downloaded onto an iPod or iPad. For those who want to keep up to date with new developments on WikiVet, you can choose to subscribe to a “feed” and new podcasts will then automatically be added to your iTunes account as they become available. 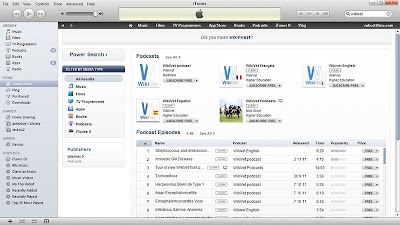 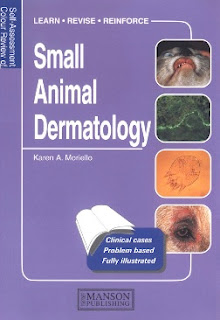 We are still progressing on the OVAL project. Some new pages that have been tweeted are:

Small Animal Dermatology Q&A - This is again a selection of sample questions from this book pictured here. These types of questions seem to be popular with users.

Another piece on news is our new French WikiVet that currently hosts all the pages that have been translated into French during the OVAL project. It is a simple version on WikiVet but it is a start! Have a look for yourself at http://fr.wikivet.net/index.php/Accueil.
Posted by WikiVet at Thursday, November 03, 2011 No comments:

Reviewing Process on WikiVet for the OVAL Project
by Helen Dirrig

Aims
WikiVet aims to have all articles reviewed by an expert in the appropriate field. For the OVAL project,
disease datasheets from CABI and self-assessment books from Manson were used. The role of expert
reviewers was to check the information but most importantly to provide updates for any newly
discovered strains, new diagnostic methods or treatments. This would ensure that the most up-todate
information was available to the online veterinary community.

Reviewer recruitment
Reviewers were recruited by the WikiVet team and by CABI. The WikiVet team asked staff members
from the RVC, experts in farm animal virology, bacteriology and large animal clinical medicine.
CABI were able to contact experts from a wider range of backgrounds, including scientists from
Brazil, Egypt, Denmark, Germany, the USA and the UK.
An introductory email was sent to any prospective reviewers explaining the OVAL project and the
role of reviewing. It was explained that the articles were aimed at the undergraduate veterinary
student body and that they did not have to be comprehensive reviews of the pathogens or diseases.
A financial incentive of £30 per article reviewed was offered.

The reviewing process
Reviewers that accepted the task were sent Word documents of the articles from WikiVet. One
reviewer was already experienced in editing WikiVet and thus did not require the word document
and could make any necessary changes.
The response time from reviewers found by CABI was usually in the range of 2-3 weeks. RVC
reviewers tended to take a little more time and needed several reminders.
Reviewers were generally responsible for reviewing several articles from the OVAL list, as many as 19
for one expert.
Reviewers generally tracked any changes made using Word. Some people preferred making
annotations on a printed document, and one reviewer preferred to discuss changes in person.
Alterations generally concerned minor details and formatting. Diagnostic methods and treatments
were often supplemented. Reviewers also offered more up-to-date references for certain articles.
A considerable number of articles required no alterations at all.
Their recommendations were collected by a member of the WikiVet team and transcribed onto
WikiVet.
The flashcards , which are question-and-answer pages associated with each article, were also altered
accordingly if any changes had been made.

Reviewer acknowledgment
The reviewer’s involvement with the article was acknowledged at the bottom of each article with a
box giving details of the reviewer’s name, qualifications, and the date the article was reviewed. A
follow-up email sent by the WikiVet team gave the reviewers the opportunity to provide a link to an
external page they may have about themselves, or offered to set up a page on WikiVet about their
work.
Most reviewers already had external links or university staff pages, and a few WikiVet reviewer pages
were created.
Reviewers were sent a link to the finished article on WikiVet and encouraged to contact the team
with any comments.
Several reviewers provided positive feedback on the concept of the site and recommended other
diseases of importance that should be added to the database.
Reviewers were also sent an invoice form to claim for their work. Overall, they were quite efficient at
sending back the forms which were then forwarded on to the payroll team at the Royal Veterinary
College.
Posted by WikiVet at Sunday, October 30, 2011 No comments:

The Opening Veterinary Access to Literature (OVAL) project involves the repackaging of currently restricted-view veterinary educational resources into an open format, which will then be made freely accessible to an international audience of veterinary online learners. It will allow us to expand the current WikiVet database of factsheets and learning resources. More details can be found at OVAL project page.